I usually try to avoid meta posts, that is blog posts about blogging, but I thought this might be interesting to others looking to setup their own site. A blog can really help when you’re looking for a job as a programmer. I speak from experience.

In a previous post I talked about switching to Jekyll so I could write my blog posts in Markdown and keep my site on Github. That was nice, but lately I’ve been spending more and more time writing in Ulysses.

I started using Ulysses around the time of NaNoWriMo. With Ulysses I still write in Markdown and I can write on my laptop, iPad, or iPhone. In Ulysses it’s easy to organize my writing and the iCloud synchronization makes everything available everywhere.

Ulysses even has built in support for publishing to Medium and WordPress. I like to own my content so, as the title suggests, I switched my site back to WordPress. 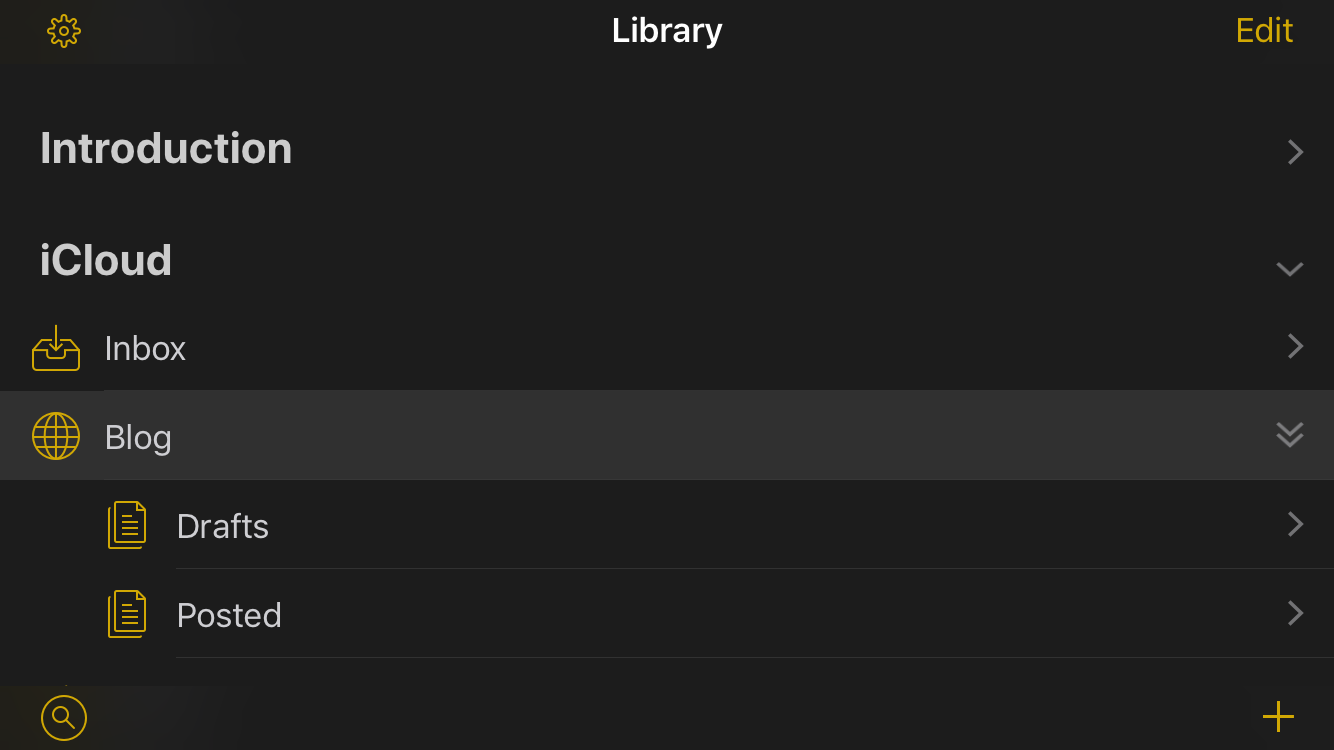 That’s a screenshot of a small part of my Ulysses library on my iPhone in Dark Mode. I have a folder named Blog and sub folders for Drafts and Posted posts.

Now whenever I come up with an idea for a blog post, I can quickly create a sheet for it. Then when I have some free time I can work on the post on any of my devices. Once it’s ready, I can publish to my site. Even from my iPhone, like I’m doing right now.

About this time tomorrow I’ll hopefully be typing much faster than I am right now. November 1 is the first day of National Novel Writing Month, also known as NaNoWriMo 2017.

The goal is to type a 50,000 word novel from beginning to end in the month of November. That’s around 1,677 words per day, every day. That’s a lofty goal, but it’s not impossible. I’ve tried NaNoWriMo once before, in 2013 while I was writing Rails Crash Course, but you can’t really write a non-fiction book that quickly. I only hit 16,359 words. It required too much research and testing.

I’ve outlined my novel pretty well, and written lists of characters, scenes, and settings. I’ve also been doing a lot of research and reading leading up to the start. A quick Google search will turn up many blog posts and other online articles promising to prepare you for the event.

Blog posts are great, but I still enjoy old-fashioned books. My favorite is On Writing by Stephen King. He’s not my favorite author, but this book really speaks to me. I don’t follow his approach to writing. He’s more of a pantser, where as I’ve always been a plotter, but I still find his stories funny and inspirational.

In addition to King’s book, I’m listening to the Writing Excuses podcast. I can’t believe I just discovered this podcast. It’s been around for years – since 2008! It has a great cast. Brandon Sanderson usually leads the discussion. This season he’s joined by Mary, Dan, and Howard. New episodes come out weekly, and each is around 15 minutes of advice and inspiration.

When it comes time to actually put words on the page, my current tool of choice is Ulysses. It syncs to all of my devices via iCloud and makes it easy to organize projects into folders and quickly switch between them. It uses Markdown for formatting which is how I write everything, even the post you’re reading right now.

This may be tough, but if it was easy everyone would write a novel.

After way too many nights and weekends, and way too much iced coffee, it’s finally done… Rails Crash Course is my new book on the Ruby on Rails web framework. This book is based on the curriculum I’ve used in the past to teach Ruby on Rails to both new programmers and experienced web developers.

The first section teaches the fundamentals of both Ruby and Rails. It covers the model-view-controller pattern used by Ruby on Rails in detail. At the end of the first section you learn how to set up a git repository for your application and deploy it Heroku.

The second section covers more advanced topics such as authentication, testing, performance optimization, security, and debugging. These concepts are explained as you build a simple social network app. It also covers creating your own Web API. The book concludes with a chapter on setting up your own Amazon EC2 server and deploying your application using Capistrano.

The book should ship around the middle of October (I already have my copies). You can preorder the book directly from No Starch Press or from Amazon.

That post from last week is one of the most boring things I’ve ever written.  I used every trick I knew to make it interesting, but I couldn’t make it work.  After messing with it for about half an hour, I gave up and clicked Publish.

There was a time when I would have deleted it without a second thought, but this was a story I wanted to share and I thought it might be an interesting experiment.  One positive side effect of this was I started seriously looking at how I write.

I try to write how I speak.  Denise gave me a great compliment the other day when she left the comment “It’s so good to hear your voice again.”  That’s exactly what I’m trying to do.

As I write, I try to hear the words in my head.  If a sentence or phrase doesn’t sound natural, I go back and rewrite it immediately.  In some cases I rewrite parts of a sentence several times until I end up with something completely different.

I also sometimes write posts entirely in my head.  If there’s a topic that I just have to write about, I will have most of it written before I ever touch the keyboard.  An example of this would be my Continuous Improvement post from while back.

I am a fast typist.  At one time I could probably think as fast as I type, but I don’t think that’s true anymore.  I’m sure it’s just old age catching up with me.

I guess that’s why I tend to type a lot more words than are actually needed to express what I’m trying to say.  My first drafts are filled with adjectives and adverbs that never make it to the finished product.

This might also go back to the days in high school when papers were graded on content as well as length.  It’s almost like we were being taught that it takes a lot of words to make a point.

I make quite a few changes while I write, but once I have a complete first draft I really start editing.  I spend at least as much time deleting, cutting, and pasting as I did writing.  Most of those extra words I mentioned earlier disappear at this point.

While I’m editing I also like to preview how the post will look on the page.  That way I can quickly spot paragraphs that seem too long.  At this point sentences and paragraphs get moved around.  Sometimes entire paragraphs disappear.

Once a post sounds like me, doesn’t contain too many extra words, and flows well on the page I click publish and see what everyone else thinks about it.

It’s strange updating this website after it was stagnant for so long.  I had quite a few drafts sitting around concerning topics that seem irrelevant now.

I deleted most of those today.  I’m sure it won’t be long until I have more half-finished posts sitting in the queue never to be seen, but that’s just the way it goes.

Even when I wasn’t updating the site, I was still writing.  I just didn’t think that most of what I was writing was fit for public consumption.  Most of it was just me complaining about the state of things.  Here’s an excerpt:

My car is filthy.  I park under a tree and birds crap on it all day.  There are no birds in my office, but I know how it feels…

That’s the beginning of a rant that went on for two pages.  Who would want to read that?

I guess some people might find it funny in a dark way. I try to put  a little humor in everything I write, even if I’m in a bad mood at the time.

I feel like I’m in a better place now, both geographically and mentally, so expect more posts around here.  Also, I park in a garage now, so no more crap…